Although not an official state visit by the president, the event was met with certain criticism and controversies of its own including widespread protests across multiple locations in the country.

The infamous “Trump Baby Blimp” used by protesters in the UK was sent to Ireland to be used, as hundreds gathered in demonstrations across the country to protest Trump’s presence in the country.

From the perspective of Irish officials, the visit was a tricky and sensitive situation, as the political climate in Europe is fragile and divisive due to European economic problems, the question of migrant waves and Brexit, all of which are currently ongoing topics. 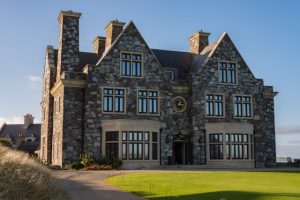 Trump went on to visit his 5-star golf course and resort in the small village of Doonbeg. The glamorous golf course resort is the property of the Trump Organization, and the president didn’t miss the opportunity to spend 2 nights in there with his entire entourage, making it seem as if his visit to Ireland was more of a personal, leisurely matter, instead of on official business. For this, the president received considerable backlash and criticism, as it was seen as him wasting taxpayer money on unimportant matters.

For much of his presidential run, Trump has been under scrutiny for his spending habits, seemingly using taxpayer money for lavish purposes.

The sleepy town of Doonbeg struggled with hosting the controversial American President as the local facilities were overwhelmed by his entourage and the big media presence.

Critics accused Mr. Trump of wasting government money to “boost” his business and help the resort financially, although, to the contrary, the resort hasn’t seen any huge boost in numbers particularly due to the visit. The local business reported a beneficial increase however, as tourists and other visitor numbers increased slightly around the time of the president’s visit.